I am glad that the Cardinals won.

I realize that's hardly a surprise to any of you. But, it's not so much that they won. It's how they won. Like men.

I hardly even remember it, but we were one strike away from the season being over. One strike. Then an Eckstein single. An Edmonds walk. And a Pujols bomb. Against Brad Fucking Lidge.

Becasue they didn't let the fucking jungle gym that is Minute Maid Park lose the game for them.

318 foot home runs? This is the fucking playoffs, Berkman, I'm sorry that you have been playing on a god damn little league field these last few years. And I hope you took notice when Pujols came up in the ninth.

That is a fucking home run.

No ticky-tack bull shit. A straight up, 400-some odd foot home run.

And you know what?

You're coming back to Busch.

You, and all of your bitch ass team-mates are coming back to Busch.

If you thought you had a home field advantage, with your imitation of Harry and Lloyd from "Dumb and Dumber" yelling "BUZZZZZZZZZ" and doing the most annoying sound in the world, and your stupid fucking dome...well...welcome to Busch Stadium.

We have real fans. We know when to cheer.

And you know what? These drunk ass midwesterners are going to be in to it.

I can't say enough about how pumped up this town will be come Wednesday...So, I'm going to pull a reprise on this one, because it's more than fitting:

Busch Stadium is not our house.

So I will not waste your time this morning talking about the importance of the Cardinals protecting our house in Game 6 of the NLCS.

I will not broach the obscenity of seeing Houston players spilling champagne on our living-room carpet.

Busch Stadium is not our house.

It's much more important than that.

It's where many of us watched our first game, caught our first foul ball, begged for our first autograph.

It's where Gibby ruled the mound, where Brock ran like the wind, and where Ozzie made all the folks go crazy.

It's where the El Birdos dominated, where Sutter struck out the last batter of 1982, where Mike Shannon has worked since the joint opened in 1966.

The Ol' Redhead managed there. Stan the Man played his harmonica there. The White Rat led us back to glory there.

This is where Gussie drove the Clydesdales, where Willie McGee tracked down fly balls, where Joaquin Andujar summed up his philosophy of life in one simple word: Youneverknow.

This is where Big Mac smacked No. 70, where Tommy Lawless flipped his bat, where GOOD GOD ALMIGHTY...BRUMMER'S STEALING HOME!!!!!!!

This is where the greatest St. Louis team in Busch Stadium's history performed. That's right, the 2004 Cardinals.

They had the best home-record, the best record in baseball. Right on that field. Not far behind them, the 2005 version.

And a beloved old man in a bright red jacket told a mournful nation why it was good and right to play baseball after Sept. 11.

My friends, Jack Buck's coffin rested on that field.

And many of us cannot walk into that stadium without thinking of loved ones who are no longer with us.

Not against the Houston Astros.

Not even against Roy Oswalt and Roger Clemens.

Not against a wild-card team.

Not in Busch Stadium.

It's simply the place where our memories congregate, where our baseball dreams are stored, where the voices of millions of fans and the ghosts of seasons past await their call to arms. 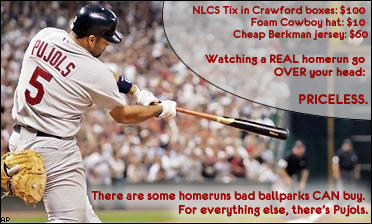 Comments:
Wow, if Voltarie were alive (and blogging) his prose and poetry could not surpass one Al Fritz... This... MOVED... me... MAN!!!

That stupid Busch Stadium thing always gets me fucking choked up. Game 6.

And on top of that...Pujols homerun...the best reaction was Pettite himself saying "Oh my Gosh!"

Alexander Fritz, there are no words in the english language that can describe this article, so I am forced to make one up......Scrumptulescent!

That was a great post. I'm all choked up now. People in my office are going to wonder why my eyes are puffy. Go Cards!!!

Man, I'm in tears over this.

This is beautiful. Thanks.

That's the most moving elegy for Busch I've ever read (even if it wasn't meant to be). Thank you.

i dont know if you noticed bro...

but that 318 left field porch has been there for your boys for the past three games as well. just cause it took 27 innings for someone to take advantage of it, well...that's their problem.

can't wait to watch the FINAL game at busch stadium be a win for the astros to put them into the world series. we will come into your house and we will pull the lever on the wrecking ball. and when you tell your kids about one of the last of the classics being demolished, you can tell them that they lost the last game to their central division competitive rivals. and that the only way it would've stung more is if it would've been the cubs.

Ya know, I hear that where Pujols' home run ball hit the stadium was right above Darryl Kile's name posted on the wall in Houston's stadium... if it is true that is so awsome b/c although Kile was an Astro, he was a Cardinal when he passed... I think Kile may have helped us out... along with God!! GO CARDS!!!!

what!!???? Cardinals won??? GRRRR I could not bet on that game because I was working, but I would have bet via some pay per head websites but I did not have internet on my phone, what a bummer

Oh, so you are using this website service. I am also bookmaking with pay per head. I love the service. You should totally check it out. I earned a lot of money from here. It has and always been beneficial experience for me with http://www.bookiesoft.com/.