I have been hearing early rumors that Albert Pujols has won his first ever National League Most Valuable Player award today (apparently satellite radio, ie. XM Radio, has a few leaks which they need to fix.)

There is nothing for me to say about Albert the Great that has not already been said before. The plain and simple fact is that Albert is a man among men. Like Kerouac writing prose amongst third-graders. Like Michael Jordan playing in a frat-boy intramural B-Ball challenge. Or a sober Jim McMahon against a defense in 1985.

It just wouldn't be fair. I could leave it at that, but I won't.

I sincerely wish Albert could have won this prestigious award sooner, but Barry L. has been busy breaking records with that enormous melon of his for the last four years.

When you line up Albert's stats for the five years that he has been in the Majors, he compares favorably to baseball greats like Ted Williams, Al Simmons, Jimmie Foxx, and Joe DiMaggio.
At the pace that he is on, Albert is not only going to become an all-time Cardinal great, but an all-time baseball great.

I have a plethora of memories provided by Albert already: Waking up my Marine buddies while screaming wildly in the deserts of Kuwait after he had a game winning hit in April of '03... His walk off against the Astros in July... The Shot against Lidge...All great memories.

But my favorite memory is that of The Lady Friend and myself, sitting in the bleachers of Busch Memorial last May. TLF and I were still in the single digit amount of dates, so that night was paramount towards the future of our relationship.

The Cardinals were playing the Dodgers and it was one of those really boring games...Sure, we had comic relief by yelling at Milton Bradley and watching as he pretended to pull a wallet out of his back pocket and count off thousands upon thousands of his imaginary dollars...and whenever the Dodgers had a confrence at the mound I could stand up and yell "HEY... JD DREW... I THINK THEY'RE TALKING ABOUT...HOW MUCH YOU... SUUUUUUUCK!!!" followed up by the bleachers erupting in laughter.

But, all in all, it was the kind of game where you find yourself being jealous of the old man in front of you keeping score because at least he had something to do every 12 seconds.

It was then, during my boredom, that Albert stepped up to the plate with a runner on second. I said to TLF, on a 1-1 count in the fifth inning "First, he got that cutter low and in and then a fastball in on the plate...see how he's moving his front foot towards right field? He knows they're going low and away on him. He's just got to smack it through, he knows what to do."

Next pitch? A curve, low and away, that Albert smacked between 1st and 2nd for an RBI single. And it was then I realized, that no matter how big of a baseball dork I was, TLF doesn't mind.

And I love her for that.

As for Albert, I know every time I have seen him this year, I have either thought to myself or said aloud "This is the greatest pure hitter I will ever see."

But I have never seen anything like Albert Pujols.

Someday, rumors may catch up with him. Maybe he's not 25. Maybe he has taken HGH. Maybe, maybe, maybe.

But no matter what happens, I'll be able to tell my children about the greatest hitter of my generation.

About his pure stroke, about his intensity, and about his greatness.

There ain't nothing like him... I swear to God.
The 2005 National League MVP
Albert "The Great" Pujols 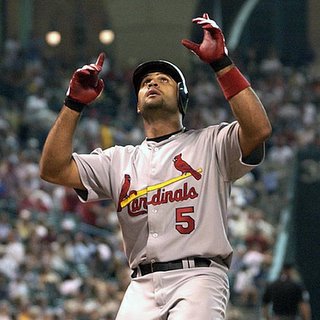 I gotta say, I was surprised it was as close as it was...congrat to Al tho.

At the pace that he is on, Albert is not only going to become an all-time Cardinal great, but an all-time baseball great.

I've read more than one comment to the effect that if Albert continues to produce at the pace he's already set, he will eclipse Musial as The Greatest Cardinal Of All Time.

Can't get more "all-time great" than that, IMHO.