Ya Mo Be There 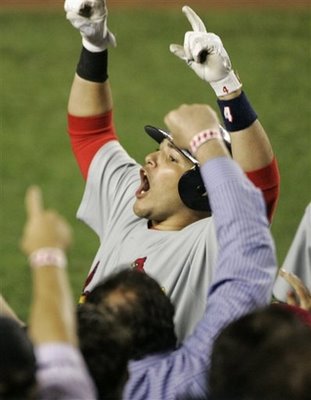 This is what I wrote on August 16th, not too long after the Cards had finished off their second eight game losing streak:

“Are they going to make the playoffs? I’d say yeah, but probably only by default, since the rest of the NL is just flat out terrible.

Are they a World Series caliber team? Well, if the ‘04 squad wasn’t good enough to win it all, I don’t see how this team possibly could be.

That’s the rub: That if this struggling Cards squad could put it all together at the right time, get all of their pistons firing and get hot, they could very well make a run to the Series...

It would be that stupid fucking storyline that the rest of the country gets sick of by the second day.

That could be us, Cards fans... Annoying the whole lot of America!

Much like when Homer predicted that the doomsday comet would burn up in the atmosphere and end up being smaller than a Chihuahua, I got that one right. And, again like Homer Jay, that scares me.

But you know what? Fuck it, we’re here. World Series. With this bunch of underachieving cast-offs and chumps.

Thanks, Randy. And thanks, Wainer.

Unfuckingbelievable. The highlight of the night? Stepping out onto my balcony to scream obscenities at Neighbor Matt after Wainwright broke Beltran’s ankles on a patented nasty deuce to lock up the series, only to see drunken kids running up and down the street yelling, folks on balconies pounding alcohol, and all around shenanigans reigning supreme.

I fucking love my neighborhood.

Now it’s onto the Tigers. Longtime friends of the blog Michelle and JTL have long been loyal Detroit fans, and I enjoyed watching the Tigs play all season; and realizing it has certainly been a magical summer for the good people of Detroit, I’m sorry that the Cards have to be the ones to finish it off for them.

Actually, all I want is a seven game series and for Joel Zumaya to be secretly traded to the Cardinals this afternoon. And a BLT. And a beer.

Is that too much to ask for? I think not.

Comments:
Alex what I absolutely love about this series is that no one, major league baseball, the city of new york, my friends in DC, wanted this series to happen.

But here we all are the teams that no one likes about to play in the biggest series in sports.

I love it! I am excited for it! And watch for me on TV since I will be at the series here in Detroit....and maybe if I can get the flight booked one in STL!

Al, you basically predicted the future, you crazy fucking bastard. Al....is your real name, isn't it?

Can you write a blog about how I'll get some serious punanni?

I am delighted that my boys, the Detroit Tigers, are playing your boys, the Saint Louis Cardinals, in this year's World Series of Baseball. This Series has so many storylines... both teams coming back from some tough times this season, classy veteran managers (who also happen to be good friends) and, perhaps most importantly, no New York teams.

As George Kell would've said, if he were still alive,* "Tonight we've got a big, big ballgame against the St. Louis ball club."

May the best team win!