I've been cleaning up a few html errors which have been occuring on the ol' blog lately (man, I'm glad that weird .edu script stopped) and looking over some archives, when I saw my comment about the 2004 US Olympic basketball team:

"Sunday's loss to Puerto Rico is still lingering in the back of my mind. It doesn't help that the Wet Dream Team just snuck by a Greek team who had George Papadapolos from Webster playing power forward. I am a fan of basketball, one of 217 Americans who still have a rudimentary understanding of the game. Watching this collection of B-list NBA talent play in Athens has now left me with a facial cringe which may take a few days to go away. When our best "outside shooter", the highly overrated Richard Jefferson, is too concerned about what to yell after his next dunk- that he can't even square his shoulders with the basket before shooting a trey- then our team is in big, big trouble.

This is not the player's fault. Although most of them look like they're trying to duplicate the play of Michael J. Fox in Teen Wolf, they play the way that they have been playing all their lives. The American's who would make the best international players either did not want to go to Athens, for whatever reason (Jason Kidd, Michael Redd, Mike Bibby) or were not invited (Brent Barry, Fred Hoiberg, myself.) The selection process simply must be changed when picking the next Olympic team, remembering that the 2008 Olympics will be held in Beijing, not at Rucker Park. "

I would like to thank not only USA basketball on their decision to include guys who would translate well to the international game (the aforementioned Kidd, Deron Williams), but also to Kobe and LeBron, who are the caliber of American player that have been passing up on the Olympics since the original Dream Team in '92.

(Also, does anyone have any of those old 1992 Dream Team McDonalds cups for sale? Those things were t-y-t tight.)

(And, of course go Illini.)

No, there isn't one.

(This is nothing but a social experiment to see how many hits that gets in a week, right here.)

(And, for equal time:


JOE BIDEN WOULD LIKE YOU TO SIT ON HIS LAP FOR SOME HOT BI-CURIOUS SEX!!!)

Our Pooch, In The Park

Sunday was the annual Purina Pooches in the Ballpark game down at Busch Stadium, so The Wife and I decided to take Yadi down to the old ballpark.

It's a pretty awesome promotion: They let you walk your dog around the field pre-game, and have the outfield all inclusive areas reserved for the dogs and their owners.

Here is Yadi getting ready to take the field. 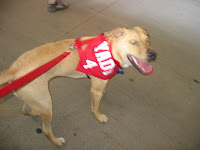 Here he is walking by the bullpen, right after seeing Braves lefty Will Ohman who was nice enough to be posing for pictures with random dogs. The Wife asked if I wanted to get a picture with me, Yadi, and Will Ohman, but considering Will Ohman sucks, I did not. 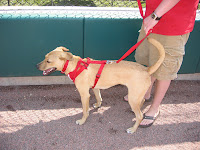 After the initial confusion of "Whatthefuckisgoingonaroundhere?!?!" and excitement by the dog population overall, the dogs realized they had a few hundred feet of nothing but people wanting to lean over the sidewalls and pet them. 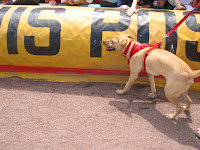 I'm pretty sure in his mind, Yadi though that a few thousand people just howed up to pet him. He fancies himself a bit of a celebrity now.

Speaking of celebrities, it's TV and Radio's Jimmy "The Cat" Hayes, who was kind enough to strike a pose with Yadi. After apparently taking a few bong rips. 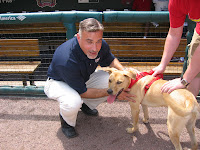 Out in Time Traveling Juan Encarnacion's old outfield corner, a chubby man and his dog: 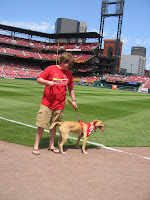 Our seats were right next to the centerfield camera, whose operator was a much more patient man than myself and didn't mind yadi trying to take over his camera duties. 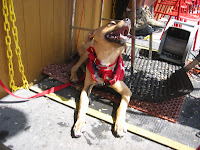 Fortunately, there was only one "dog incident" all game messing with his shot.

I was pretty amazed how well behaved a hundred some odd dogs could be in one space, but there was not an incident to be seen. If only people could behave so well. Plus, the Cards won.

And it was the best day of Yadi's life (he's been asleep since we got home yesterday around 5.)

All of this excitement came after an evening of playing with Mr and Mrs Husbands new tiny, tiny animal Kona, so Yadi, who is in fact the laziest eight month old puppy in Missouri and generally sleeps sixteen hours a day, may or may not be dead right now.

He hasn't left the couch in hours.

I wrote it down on a piece of paper

I know I have posted this before (probably w/ a hilarious desrcription of how I used to sing this version of a Cutting Crew classic while waiting for breakfast aboard the USS Ashland), but it came up during Wed's baseball game with Dennis Quaid (I have no idea how, so don't ask) and it's still hilarious:

i wish bapo would kiss me

Just trying to generate some traffic.

The Man Who Made Mike Nadel More Famous

Yesterday morn, after pursing my hometown's local rag, I forwarded this bizzare column about Erin Andrews whoring it up (or something) in the Cubs locker room to The Big Lead which morphed into this post on Deadspin, then this on TBL, and these on the internets, and this interview with Nadel on Deadspin.

Honestly, I've always liked Erin Andrews (who, while attractive, isn't any hotter than a lot of broads you see at bars these days) (yes, I still say "broads". I also wear fedoras.) (And I also say "these days", making me apparently 68 years old) and she takes too much shit just because she's attractive. howerver, flitting around (whatever the fuck "flitting" means) the Cubs clubhouse is beyond strange, and I figured TBL would like to hear about it. Since I'm one of twelve people who actually reads a paper Nadel writes for, I figured I'd be the only one to spread the message on this weird, weird topic.

(Honestly: "At one point, she placed her hand suggestively on Soriano's left bicep."? How'd this guy even get through junior high?)

The column originally penned didn't come across to me as jealous as it did to some others. It had legs but ended up falling flat on it's face, ending as well as a Joel Pinerio start.

Nadels' not a bad columnist, he's just not funny. When he tries to be, it doesn't translate and makes for a sad trombone.

So, in conclusion, I need to stop reading random papers and forwarding articles before I kill what Al Gore invented. Also, I need to write more on this here digital toilet. And Erin Andrews showing it off in the Cubs locker room kind of pisses me off as a Cardinals fan. What, Braden Looper doesn't do it for you? The guys got an eight inch cock... around.