Sarcasm at the Ballpark

There have been three times in my life where I have either said or done something so utterly ridiculous at the perfect moment for such action, that I look back on it not only the next day; but for weeks, months and years to come and still bust out laughing.

The first would be at my senior year prom in high school, when I stood up at my table after our meal, got everyone in the banquet halls attention and said "I'd like to give a toast... To the worst steak I've ever had!" followed by a deafening silence by the wait staff of the restaurant and the chaperones in attendance, which was broken only by a few of my friends laughing at what a jackass I was.

The second time was when I was in the Marines, living on a boat, and frankly a little crabby. Some kid came out of nowhere, wanting me to do some manual labor or something and asked me what my job was. My response: "I'll tell you what I don't do... I don't ask stupid fucking questions. But do you want to know what I do do? I mind my own fucking business." That kid never bothered me again.

The last time I honestly entertained myself was when I was in Spain and walked up to an old Spanish couple and said "Donde esta la biblioteca?" They promptly answered my query, at which point I smiled at them and said "Did I say biblioteca? I meant discoteca!" And then I started dancing around them and ran away. Yes, I had been drinking.

Now, I'm not saying any of those three instances were funny in their own right, but they were three times when I either said or did exactly what the situation called for, and for whatever reason, they stick out in me memory.

Which brings me to last nights beisbol game. Mozzy and I were sitting out in the left field bleachers, the Cards were getting their asses kicked, the sound crew at Busch were playing unbelievably bad techno music the whole time, we were surrounded by idiots, and I was kind of hoping that my head would explode, not only so I didn't have to watch the game anymore, but so the morons around us would have to wash not only their face paint off after the game, but also my blood, tissue, and brain matter. (too much?)

Anyway, with the Mets ahead 5 to 2 in the fifth inning, NY pitcher Oliver Perez came to the plate with two on and two out. Randy Flores was pitching for the Cardinals and he let Perez get ahead in the count when one of the hicks sitting behind me said "Come on Flores, get this guy... this guys swings the bat like...a guy... who... doesn't swing a bat real well."

And that was the fourth time in my life I have said exactly the right thing and at exactly the right moment. I leaned forward in my bleacher seat and shared a laugh with the guys around me. I took a nice cold pull off of my Budweiser and relished in the sarcastic moment. I could not have been any prouder.

As for the game itself? Lets just say it made me want to puke. And not in a figurative kind of way.

But this little league-esque picture of Juan absolutely kills me: 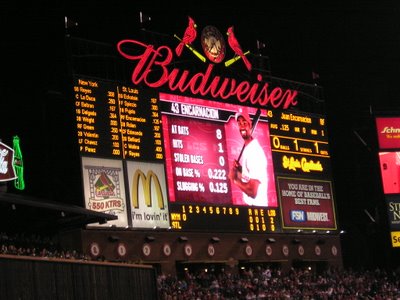 Look how happy he is!