A Day in the Life of Jose Vizcaino

We all knew that J-Rod has a playoff blog going on, but did you guys know that Jose Vizcaino has one, too? (I think it's down for maintenance or something right now.) Well, he does!

Here's his post about yesterday's off day in New York:

7:35 – Finally woke up when I got a call from my old friend and teammate Willie Wilson (I can tell it’s him before I even answer because my phone plays “Quality Time” by Hi-Five whenever he calls.) Him and Shawon Dunston were out at a club last night and were talking about how they couldn’t believe I was still playing professional baseball. Well, I am. Bitches.

8:00 – Morning meeting with Toucan Sam and Harry Hood. Aunt Jemima is invited, but fails to show, as the Hampton Inn’s continental breakfast does not include hot items.

10:00 – Called Tony La Russa and reminded him that I was 9th in the league in both singles and sacrifice flies in 1993. Tony loves stats, and I think this helps my case to start at short in the NLCS.

10:00 – 11:00 – Price is Right on CBS. If I was on Price is Right, I would hope for either “plinko” or “cliff hangers.” I’m really good at game shows, though. I actually got signed by the Dodgers after one of their scouts saw me win the physical challenge on Double Dare in 1986.

11:00 – Called Tony and reminded him of that home run I hit at Shea this year. That was a BOMB! I'm totally starting this series!

11:30 – Went down to Jimmy Johns and got the Sorry Charlie with extra sprouts. For some reason, the manager there kept asking me if I want a job. I kept telling him that I have a job (as a professional baseball player!) but he didn’t believe me. He said I retired eight years ago. I didn’t!

2:00 – I headed down to the stadium to get ready for our workout. The security guard at Shea wouldn’t let me in. He said I haven’t played since 1996. I reminded him about my GAME WINNING HIT IN THE 2000 WORLD SERIES FOR THE YANKEES, and he told me I was crazy. Luckily, Preston Wilson was nearby and he could vouch for me. But then he just walked right past me, like he didn’t know who I was. I had to call Joe Pettini to come and get me.

5:30 – It took him three hours to show up, but Coach Pettini is a man of his word and he finally came to the gate and got me. He was on his way out though, and by the time I got to the locker room, everyone was already gone. That’s okay, though. When you’re a veteran like me, you don’t really need the practice. I’ve been here before.

6:00 – I made it back to my hotel. I wish I could stay at the same hotel as the rest of the guys, but they said it was sold out. That’s cool, though. This is a good chance for me to use those Hampton Inn points I’ve been saving up. Since I missed the workout at Shea, I decide to get some exercise.

6:45 – I finished up with my daily workout of 8,000 calve raises. If you kids out there want to play pro ball, you got to have strong calves, and nothing strengthens calves like calve raises. Some people will say the core muscles are most important. NO! It’s calves.

7:00 – Dinner time. Apparently the McDonalds here aren’t doing $1 Big Macs on Cardinal game days like they do in St Louis. That was how I was planning on making the $8 a day per-diem the team is giving me go the extra mile. Now I’ll have to think of something else.

7:10 – The Hampton Inn has free mustard packets and some leftover banana nut muffins from this mornings continental breakfast. Jose likes both of those things!

7:30 – Banana nut muffin and mustard sandwich not nearly as good as Jose thought it would be. Jose needs to lie down.

8:15 – Called WFAN to see if they want to talk about my GAME WINNING HIT IN THE 2000 WORLD SERIES FOR THE YANKEES. They do not.

8:17 – While I’m thinking of it, I call Tony and reminded him about my GAME WINNING HIT IN THE 2000 WORLD SERIES FOR THE YANKEES. I went straight to voice mail, but he is always checking his messages (at least he is whenever I try to talk to him) and I think reminding him that I am both CLUTCH and a PROVEN VETERAN will help my case for making the NLCS roster.

12:00 – Writing this! Then it’s off to bed. I hope I start tomorrow. I know David Eckstein is scrappy and all but did he have a GAME WINNING HIT IN THE 2000 WORLD SERIES FOR THE YANKEES? NO! But guess who did? JOSE VIZCAINO! 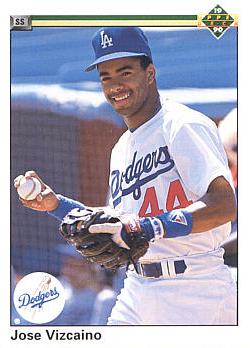 Comments:
he looks really, really happy in that baseball card.

That was goddamn hilarious.

Ninjacellprime let it go?? Ja ja ja you say that cause you neber had a chance im a kid from the ghetyo by shea and jose looked outand heart ..ever heard about a man thatll give you the shirt of his own back ...vizcaino gave me his glove off his own hand a2000 i just didnt choose the right route!!! Just like you besa la mano!!!!! Google it. Chris peralta